I recently got esp8266 cheap wifi module. I had idea to use it with arduino and existing project that was using CmdMessenger library to comunicate over serial/usb port. After playing with esp8266 I found nice solution to how to replace serial cable. I installed NodeMCU on esp8266 and installed on it two scripts

I have couple of programs that I use very often and I needed some utility that would let me start them using keyboard shortcut. I searched internet but could not find anything simple enough that would suite me, so I decided to make my own simple utility that would allow me this.

Hotkeys is very simple. Upon starting icon will be shown in taskbar and right click opens menu.

selecting Edit Hotkeys opens new window where you can edit your shortcuts. 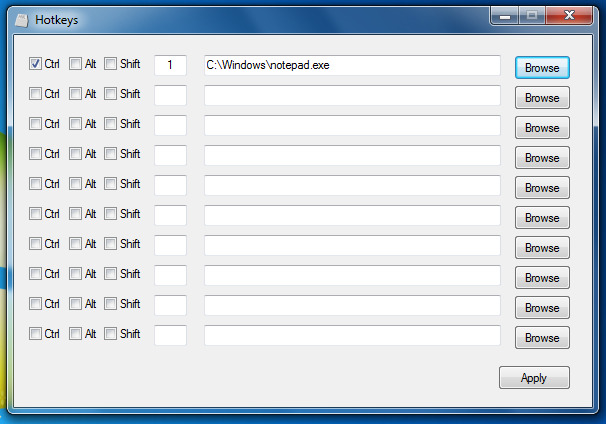 Shown above is one shortcut for notepad. Ctrl is checked and “1” is entered as shortcut which means that pressing simultaneously Ctrl+1 will open notepad. Clicking on Apply shortcuts are saved (just closing window dismisses all changes). All shortcuts are saved into .ini file located in programs directory. Program is written in autoitscript and source is also available bellow for download. Any suggestions and comments are more than welcome 😉